Factories can include multiple processes under one roof, like manufacturing, assembling, packing, repairing, maintaining, testing, processing, storing etc. Factories typically consume both electricity and heat energy, and consume a great deal of diesel for power generation. Solar PV can help abate your diesel power bills, and in some cases even grid consumption depending on your power tariff. The energy consumption pattern varies for each type of factory with respect to the processes and requirements.Solar energy for factories can be taken from two different perspectives:

Let us consider the 2 scenarios now:

Solar powered factories typically have a rooftop space which can be allocated for the installation of solar PV panels. It can meet a percentage of the electricity requirements of the factory. Solar electricity provides added value especially in the case of factories as it can offset peak consumption. The purpose of setting up the panels on the rooftop is that it avoids the requirement of additional land. Let us look at some cases where PV panels have been employed in factories. One important feature of this installation is that it uses string inverters to offset any irregularities in solar generation caused by shading occurrences on the roof.

Burder Industries is a regional manufacturer of customized tractor and earthmoving equipment for the agricultural industry. They deployed solar as a solution to reduce its operating costs in order to stay in competition with other players. 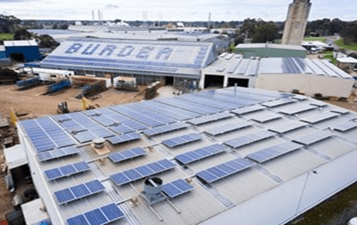 For more details on the installation, please refer the following link:http://www.manmonthly.com.au/news/burder-industries-raises-competitiveness-of-manufa

Currently, when we talk about solar powered factories, the talk is about using solar PV panels, whether it be rooftop or ground-mounted, focusing on the electricity generation aspect. But factories consume a lot of energy in the form of heat . Especially in the case of applications like smelting of metals, processing of chemicals and HVAC systems within factories, solar thermal heat can be used directly instead of utilizing the electricity supplied by PV panels.

Some examples of solar thermal installations are given below: Now, let us discuss the advantages and constraints of setting up solar powered factories.

As the available space (rooftop or ground) may not be sufficient to support the entire electrical load of your facility with solar, it becomes necessary to estimate the different kinds of loads to identify loads that can be/need to be supported by solar.

Electrical loads are estimated by calculating the wattage or amperage of electrical equipment in use (as shown here), which can be further classified as light loads and heavier loads, with solar being used to support the light loads.

Typical electrical loads in a factory include

Manufacturing and processing equipment typically account for almost half the electrical load in the factory.

While some factories require niche solutions based on the products they produce, Solar Mango’s recommendations for most factories are

Alternative 1 – Grid-interactive configuration where solar power is supplied in conjunction with EB or diesel power. Here the rooftop solar plant serves to reduce diesel bills by supporting part of the overall load

Alternative 2 – A battery-backed grid-interactive solar plant that only supplies specific loads such as lighting, but can support these loads without interruption even at night. This is suitable for factories that operate during night hours, or have critical loads that must work continuously without waiting for a DG to start