Solar Mango recently visited a solar installation in Chennai. Unlike Solar Mango’s usual site visits which focused on solar PV, this was a solar thermal installation.

The site was the manufacturing unit of Avon Seals Pvt Ltd, a manufacturer of mechanical seals for domestic and agricultural pumps in India, at Ambattur Industrial Estate, Chennai. The company installed a parabolic trough solar concentrator (PTSC) on their rooftop to meet their heating requirements.

Avon Seals Pvt Ltd, motivated by their initiative to go green, decided to go for the parabolic trough solution for meeting a portion of their heating needs.

The heat energy generated by the parabolic trough system is utilized for the purpose of ultrasonic cleaning of the seals up to a temperature of 70 -80 degrees Celsius. The PTSC unit is a complementary heat source that is used in conjunction with a 12 kW electric power source. It works as a hybrid system now.

A snapshot of the parabolic trough installation is given below. 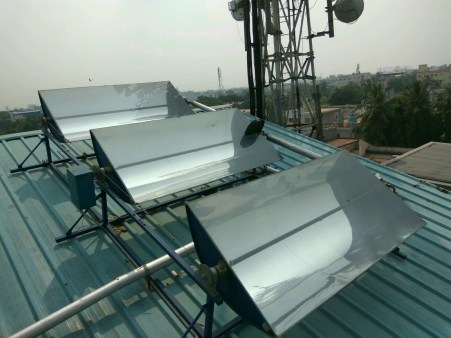 What are the components of the PTSC unit?

The major components of the parabolic trough unit are

The collector is in the shape of a parabola composed of a polished mirror. The parabolic mirror focusses the sunlight onto a metal tube which consists of a thermic fluid (oil). The heat absorbed by the thermic fluid, which reaches a temperature of 100 degrees Celsius, is transferred via a heat exchanger to the water for ultrasonic cleaning. 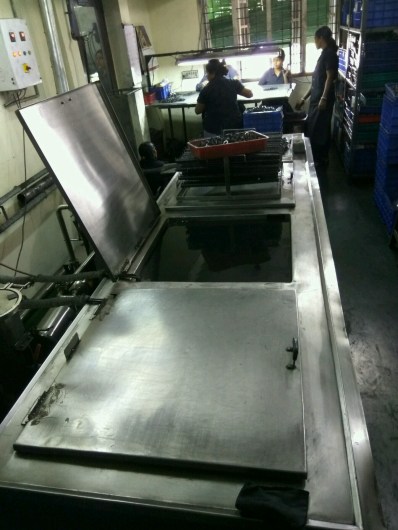 The Balance of System (BoS) components such as pumps, storage tanks, heat exchangers, and pipelines.

The design and installation of the PTSC plant were carried out by Acclaim Technology Services, a technical design and engineering design consultancy based out of Chennai. Having started as an engineering services provider to chemical industries, Acclaim has diversified its’ focus to the green energy sector.

The design utilizes a number of sensors. The four sensor units that are built into the design serves specific purposes.

Another key feature of the design is a two-stage geared motor. A two-stage motor ensures that any sort of jerks or vibrations are avoided when the unit is started.

The design is complete with a timer mechanism which automatically switches on/off when the sunlight is low or unavailable.

The maintenance required is minimal with cleaning required once a week. However, in high dust areas, it Is recommended to clean every two days.

Ease of Installation – A clear differentiator of Acclaim’s  parabolic trough design is that it can be easily installed on a pre-fabricated structure. Typically, parabolic trough systems do not come with such kind of flexibility.

Low-Cost Tracking system – The tracking system includes the drive, sensors, and controls that tilt the troughs with respect to the direction of the sun thereby maximizing heat energy generation. Although most parabolic trough designs come with tracking units, this photo-sensor based tracking unit is simple in design.

In this case, the system was installed on a metal roof. However, it can be installed on any kind of roof depending on the structure strength and area available.

The key benefits offered by the parabolic trough solar system include

Of course, as an investor, there is always the question of which technology (available in the market) to choose from. There is the ever-attractive solar PV for electricity. And then there are solar thermal technologies for industrial heating purposes – evacuated tube collectors (ETC) and parabolic trough collectors.

The industrial sector is the largest consumer of energy in India. And approximately 30% of the heat energy used in industries is for heating below 100 degrees Celsius.  Currently, the demand is met by fossil fuels like furnace oil, gas, coal, and diesel, which are highly polluting fuels.

In an increasingly climate sensitive environment, there is a huge need of replacing conventional heating technologies with cost-effective and greener solutions. Acclaim Technology Services, through its specialized design expertise, has developed an innovative solution which combines low-cost solution with a high design flexibility to not only help small and medium industries complement their existing heating generating sources but also significantly reduces their carbon footprint. 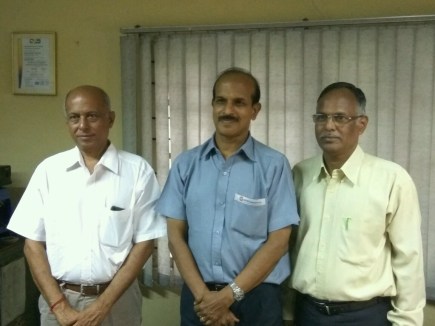 To get in touch with Acclaim Technology, kindly contact Mr. Divakar