Highlights of the Plant

Now, you may ask, what is so unique about this plant that Solar Mango team went all the way to this remote location to dig up details about it? Of course, one reason is that it is one of the oldest performing solar plants in the country. But what makes it unique are 4 specific features (as mentioned in the box above).

The turnkey project implementation of the plant was undertaken by Insolare Energy, an EPC Company based out of Bangalore. Founded by a team of IIT professionals, Insolare has implemented over 15 MW of solar projects with around 40 MW under various stages of installation.

An aerial view of the solar plant is given below. 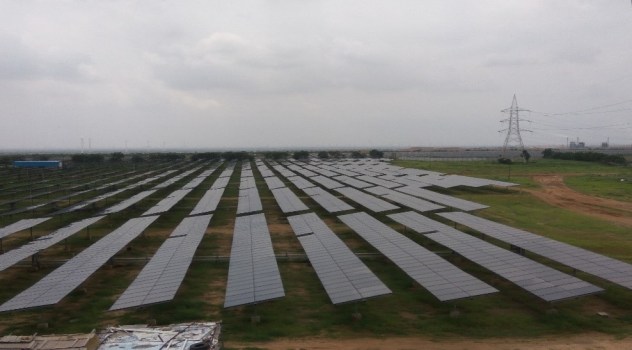 Some key stats and component details of the plant are given below.

Now, let us discuss each of the highlights (mentioned earlier) in detail.

The single-axis trackers are an in-house technology developed by Insolare. A key feature of the hydraulic system is that it ensures a high safety factor in load bearing capacity.

There are 18 tracker units (more appropriately called HPUs or hydraulic power units) utilized for tracking 18 arrays of solar panels, with each tracker unit moving the panels in the east-west direction.

Some of the components of the HPU include 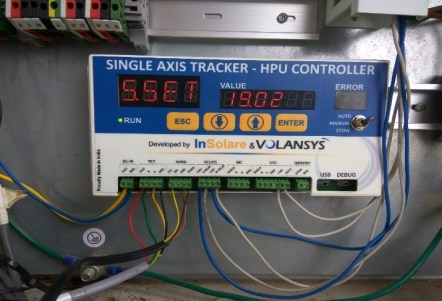 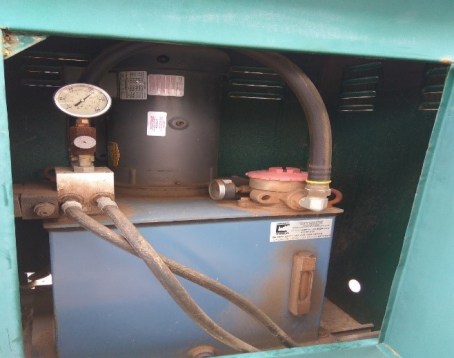 The tracker controller calculates the new tilt angle, and compares it with the digital tilt sensor which provides the reference angle of panels. The difference is adjusted for the new position.

Use of Insolare single-axis trackers results in an increase in output energy generation of 15-20%, which is highly commendable. The two-year tracker controller warranty provided by the company also adds to its value.

It is very encouraging to note that during its 5 years of operation, there has also been no structural failures due to tracker operation in the solar plant. From an O&M perspective, the trackers have been trouble-free for the most part, except for occasional replacement of hydraulic oil as part of routine maintenance.

This tracker technology has also been used in another project commissioned by Insolare for Infosys in Hyderabad.

The panel manufacturer, NexPower is based out of Taiwan, is one of the leading producers of thin film modules.

One reason for utilizing this thin film technology was the fact that thin film panels exhibited better performance under hot conditions in comparison to polycrystalline panels. Moreover, they perform relatively better under low light conditions.

Despite the rather newness of the technology implemented, the plant is running smoothly and has faced hardly any damages due to inherent technical issues with the panels. Most often the panels were replaced due to physical damage mainly because of people throwing stones or weather damage.

A very interesting claim by the O&M guys who have been working at the plant for the past couple of years is that, the amorphous silicon panels have not undergone any major panel degradation. Typically, with polycrystalline panels, an annual panel degradation of 1% is normal.

Insolare, being in-charge of the day-to-day O&M of the plant, has ensured that a robust infrastructure is in place for conducting the maintenance in a well-structured manner.

In order to ensure the O&M quality in the plant remained high, Insolare has taken the three steps as detailed below.

Four full-time O&M engineers have been deployed at the plant site to performing the daily operations. The team comprises a good mix of experienced and entry-level employees. All of the them are from an electrical and/or electronic engineering background.

They perform various specialized component checks and supervise the overall functioning of the plant.

Due to the long and extensive nature of O&M activities performed (all days including Sundays, which typically extends even till 8 PM during winters in Gujarat), most of the O&M engineers are housed within the plant. This ensures 24×7 availability of O&M service at the site.

The maintenance checks are conducted by strictly following procedures from a checklist. The various checks conducted include the following.

The SCADA system has been instrumental in managing the operations and maintenance of the plant. It monitors various parameters at the inverter level which include energy generation, power output, efficiency etc.

It also monitors the plant at the string junction level. Although not as comprehensive as state-of-the-art monitoring systems, it does help identify faults at the string level by measuring output currents from each string.

Inverters and string monitoring units are among the most troublesome components of the solar power plant as they more prone to failures or faults. Hence these are continuously monitored.

A robust O&M framework combined with use of single-axis trackers have ensured that the plant performance levels remained consistently high in comparison to existing plants in India.

Insolare’s single axis tracker plant in Gujarat has been one of the top performing solar plants in the country. In fact, according to data released by the Gujarat government, it has remained in top position in terms of monthly output in every May, which is also the month in which plants reach their yearly peak generation in this region.

The graph below depicts the yearly generation from the 5.02 MW dc plant.

As a result of efficient project execution as well as best of breed O&M practices maintained post the implementation, the plant has consistently delivered CUFs above 20% for the last three years. This is approximately 15% higher than tracker-less plants in the region that have typically provided CUFs only up to 18%.

This is an incredible feat considering the fact that this was one of the first solar plants put up in India, at a time when only a few players offered solar project implementation capabilities. 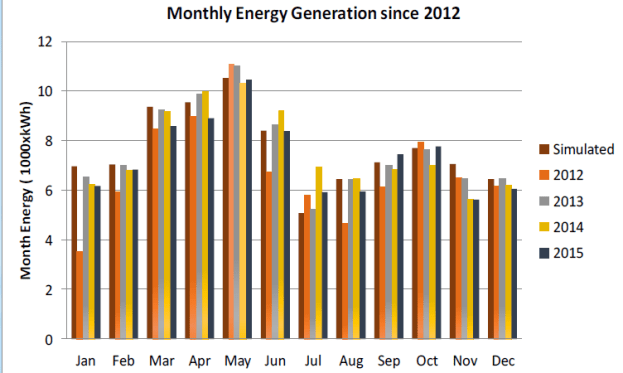 As expected, Mar – Jun has been the top performing months with May contributing the highest. In May, the energy generation has been over 10 lakh units for all the years.

Note from figure 5 that there was a dip in energy generation during the first couple of months of 2012 right after commissioning of the plant. Clearly, being early days for solar, there were some starting troubles to get the plant completed. But what is encouraging is that the generation has been consistent since the last quarter of 2012.

It can be be said that, broadly, the actual generation  has been in tune with the simulated values, except for some inconsistencies in the first year of generation (2012).

To conclude, Solar Mango opines that this plant serves as an appropriate example of a top performing and well-functioning solar power plant in India.

Hats off to the Insolare team for its superior project execution capabilities and post-implementation management of the plant!